The Macquarie Harbour on Tasmania's west coast. Hundreds of whales are beached along the shoreline. 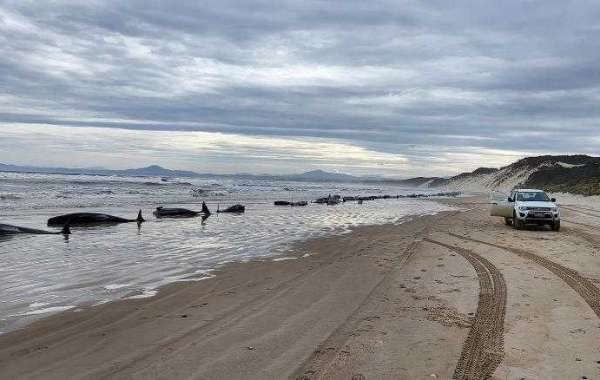 More than 200 whales have been found stranded in Australia on the western shore of Tasmania, wildlife officials said.

The animals, which appear to be pilot whales, are currently stranded on a beach and a sand bank, the Tasmania Parks and Wildlife Service said in a statement issued on Wednesday.
"Early reports estimate that about half of the animals are alive," it added.
It also said that experts were on the scene to assess the current situation and would be planning "an appropriate response."
It stressed that volunteers were not needed at the moment.
Mass whale strandings have baffled marine scientists for decades.
The incident isn't the first of its kind to occur in Tasmania, an island state off the southern coast of mainland Australia. A mass stranding in 2020 saw hundreds of whales stranded in a harbor -- making it the largest mass whale stranding in Tasmania's history.
Another distressing case this week saw more than a dozen young sperm whales found dead on another Tasmanian beach. The animals, mostly males, were first discovered by wildlife authorities on Monday afternoon were believed to be part of the same bachelor pod.